Clearly various species of female mosquitoes and myself seem to have a slight communication issue. Having been forced into this rather parasitic polygamous relationship my patience has, after over two decades of torture, finally run out. Furthermore considering that various mosquitoes act as vectors for diseases such as yellow fewer and malaria I do not wish to push my luck any further during my future trips into the rainforests of this world. Hoping to build an effective, affordable and portable trap it is as a first step necessary to understand what exactly mosquitoes are attracted to. 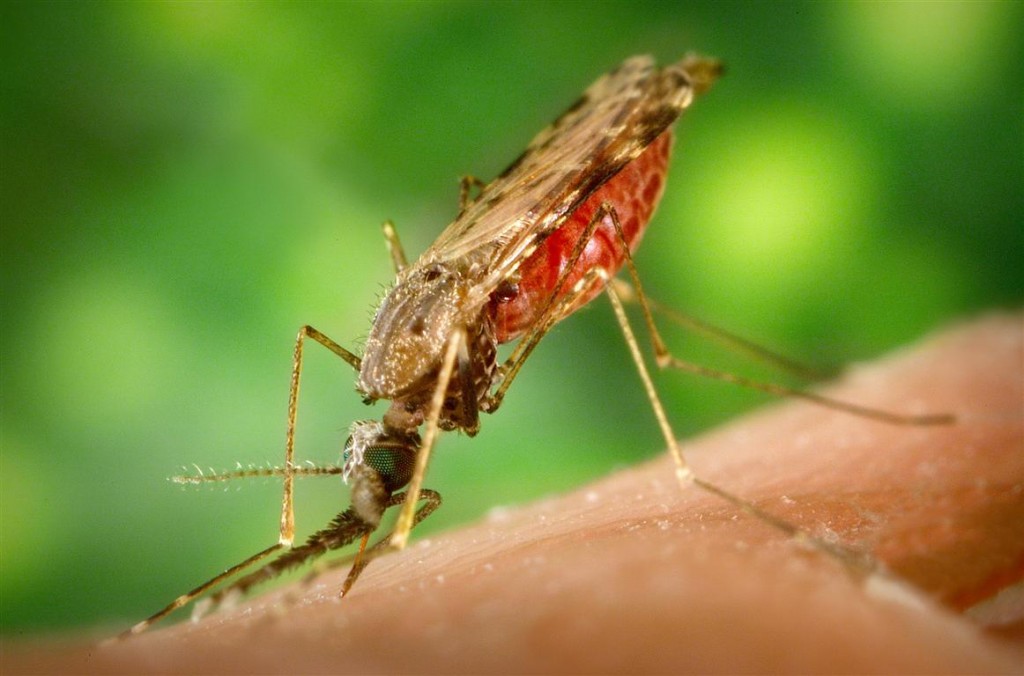 Female Anopheles albimanus mosquito while she is feeding on a human host, thereby, becoming engorged with blood. (Source: Center for Disease Control and Prevention, ID 7861)

“Using their highly sensitive olfactory organs, these mosquitoes can select more attractive persons over less attractive ones by identifying chemicals present in breath, sweat and other skin emanations originating from the persons. Though not adequately understood, these evolutionary host preferences may benefit the mosquitoes in a number of ways including the identification of hosts with more nutritive blood, or those who are less defensive against mosquito bites.” (Okumu et al. 2010) In the following paragraphs various possible attractants will be investigated as a potential suitable lure for the trap.

The table shows the responses of female Aedes aegypti at room temperature and to convection currents in an olfactometer assay (Eiras and Jepson, 1994)

Mosquitoes are not only attracted to dark damp places and still water so they can lay their eggs, but also to humidity. Considering that the average person sweats about 500ml of water a day, humidity is either an indicator for water or and for a potential meal, both clearly attractive opportunities. Whilst Eiras and Jepson (1994) found that the Aedes aegypti did not leave the 30°C degree chamber for the colder 27°C warm chamber with high much higher humidity levels, the number of mosquitoes responding increased significantly when water was released into the 30°C chamber. 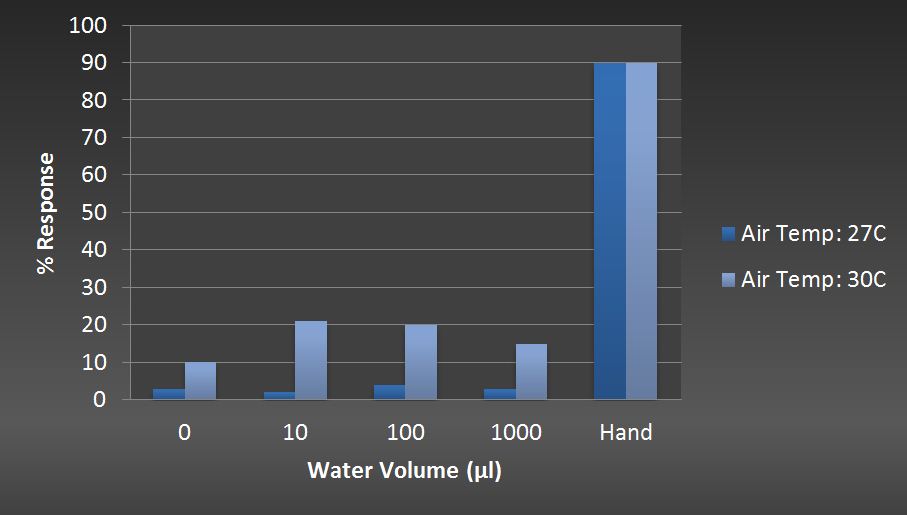 Figure 1. Responses to humidity and heat, based on Eiras and Jepson (1994)

Eiras and Jepson (1994) found that human sweat plays a significant role in the attraction of the Aedes aegypti. Interestingly, only in combination with heat does the mosquito respond to human odour. Eiras and Jepson (1994) believe that this is because heat is needed to activate various compounds as well as develop the correct vapour pressure for their distribution.

Mosquitoes have been known for a long time to look for the increased CO2 concentrations in the air to find their prey. Smallegange et al. (2010) demonstrated this beautifully in their semi field experiment where they released a certain amount of mosquitoes that were allowed to at any time choose between the treatment or control trap. Their findings in table 3 below show that CO2 is an effective attractant for the An. gambiae species. As we have previously observed sweat is a potential bait only when it is heated. Unluckily Smallegange et al. failed to include a heated worn sock in their experiment.

Lactic acid, also known as milk acid, is a chemical compound that plays a role in various biochemical processes and is amongst other places found in human sweat and in human mouths as lactic acid bacteria convert sugars into lactic acid. According to Geier et al. (1996) L-Lactic acid is a major constituent of skin wash extracts and it is a necessary component for the extract’s effectiveness. As a single stimulus, however, L-lactic acid is only slightly effective. Eiras and Jepson (1994) on the other hand note that lactic acid, alone or in combination with convection currents (heat), failed to elicit response at close range when excluding the effect heat has on its own. Concretely their findings showed that with various concentrations of lactic acid and convection currents resulted in an average response of 22%, thus being 6% lower than the response to the combination of water and convection currents.

Lactic acid does however have a significant effect when combined with other substances. According to Okumu et al. (2010) CO2 and Ammonia in combination with lactic acid further increased the effectiveness of the trap substantially.

Octenol is, similar to lactic acid, also contained in human breath and sweat. Kleine et al. (2007) found that whilst octenol does attract mosquitoes, it greatly differes in its effectiveness of attracting different species. Specifically, octenol has been demonstrated to not be a strong attractant for Stegomyia mosquitoes. This subgenus also includes the aedes aegypti which is a vector for transmitting several tropical fevers such as yellow fewer. In an Australian study, a comparison of octenol and CO 2 as attractants for Ae. aegypti with Fay-Prince traps in Queensland reported that octenol significantly decreased collections. I find it thus very controversial that many of today’s mosquito traps use exactly that very substance to attract their victims while failing to mention the ineffectiveness against mosquitos that pose a serious threat to health.

Nonanal is an alkyl aldehyde that is once again produced by the human body. Zainulabeuddin and Leal (2009) found Nonanal to be highly synergetic with CO2 resulting in a significant increase in capture rates of over 50%.

Brown et al. 1981 found that when mosquitoes were collected in cuboid, “funnel target traps of 5 colors and results indicated a differential preference: aedines and Mansonia perturbans preferred black, red and blue over white and yellow. Mansonia perturbans showed substantial color differentiation during both day and night. The percentage luminous reflectance of light from each color-stimulus target was inversely proportional to the number of mosquitoes trapped in the target. Mansonia perturbans landed in greater numbers on filters transmitting wavelengths of 400-600 nm, while low numbers landed on filters transmitting wavelengths longer than 600 nm. Two species of Aedes and Mansonia perturbans responded in greater numbers to cuboid rather than pyramidal targets, while Ae. punctor was taken in larger numbers from pyramids.”

The reason behind the low response rate to the wavelengths longer than 600nm is due to the mosquitoes from us different spectral sensitivity. Mosquitos can simply not see red. Muir et al. (1993) analyzed the spectral sensitivity of the female Ae. aegypti which can be seen in Figure 3 below. 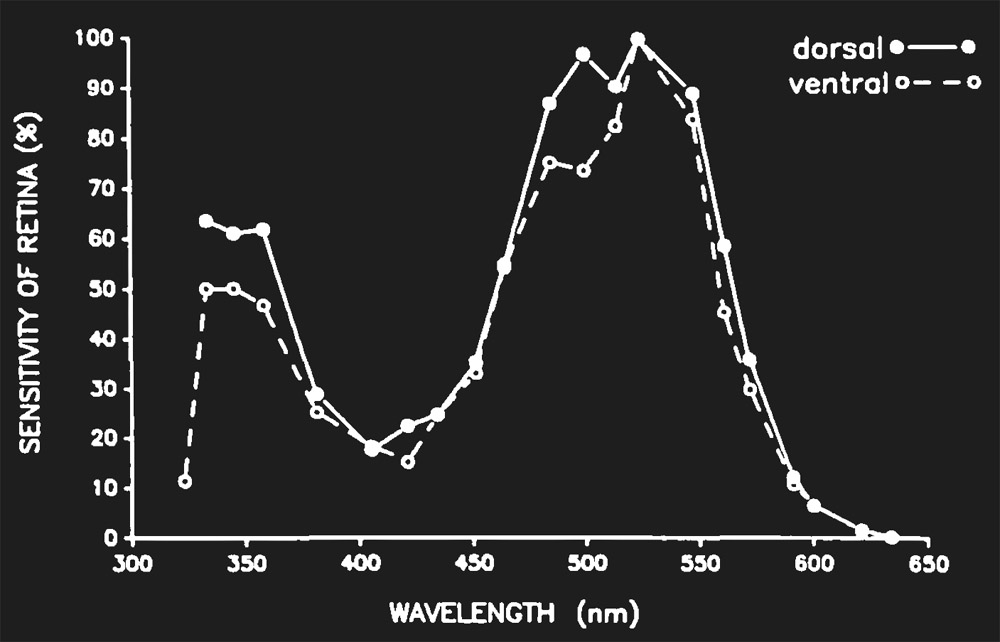 Beehler et al. (1993) conducted an experiment trying to evaluate whether or not dyed water (dyed with black ink) is more attractive than undyed water. Whilst dyed water under fluorescent light was only slightly more attractive to Culex quinquefasciatus, if a 15w incandescent bulb was used for 1 hour after the fluorescent light was turned off, the egg rafts found in the water increased by threefold.

Green and Flint (1986) compared the varying effectiveness of different coloured traps. This also included a series of of achromatic traps ranging from black, through various greys to white. “Phthalogen blue traps caught significantly more than any of the achromatic series, whereas yellow traps caught significantly fewer. There responses to colour appear to be determined by spectral reflectivity in three different wavebands: ultraviolet, blue and green-yellow. Blue increases attractiveness while ultraviolet and green-yellow decreases it.” This also explains why all those ultraviolet traps seem to catch everything but mosquitoes. Considering the Ae. aegyptis negative response to UV light as well as that the mosquito’s second spectral peak around 345nm(UV range), it seems they are using the UV spectrum to detect and evade the potentially harmfull sun.

Significant progress was made by Bishop et al. (2004) who found that Green LED light to significantly increase attraction of the C. brevitarsis. “A trap with green LEDs would have generated a positive report at the site at any time for that month and was 9-fold more effective overall. (Below the findings of Bishop et al. 2004)

So even though the blue LED did in fact attract the mosquito species the white and green LEDs where certainly more effective. Bishop et al. (2004) also noted that capture efficiency of the green LED was also dependent on the LED’s brightness. Interestingly is however, that sand flies for example seem to repond best to red LEDs. (see Mann et al. 2010) However other mosquito species such as Culex erraticus and Aedes infirmatus prefer blue LED light according to According to Bentley et al. (2009). All mosquitos do however without exception dislike Red and Infrered LEDs and similarily to Bishop et al. the highest overall mosquito catch rate was achieved with a green 502nm diode. (Bentley et al. 2009) Considering how closely those results overlap with the spectral sensitivity of the Ae. aegypti it seems they like most the light spectrum they are most sensitive to. Thus a light source emmitting light at 530nm might be most efficient in attracting the yellow fewer mosquito.

No study could be found that included pulsating LEDs or LEDs that are changing their brightness over time. Possibly much higher catch rates could be achieved with a green and blue LED array that seamlessly changes between the two colours over time. An experiment on this hypothesis will be carried out once a trapping device has been built.

Last year a group of Entomologist combined their efforts to develop and field evaluate a synthetic mosquito lure that is more attractive than humans. Okumu et al. (2010) began with a weakly attractive mixture containing 2.5% aqueous ammonia and CO2gas flowing at 500 ml/min, which was enhanced by adding 85% L-lactic acid (LA). Onto the resulting mixture, each of the other aliphatic carboxylic acids was added separately, each of them at their optimally attractive concentrations. 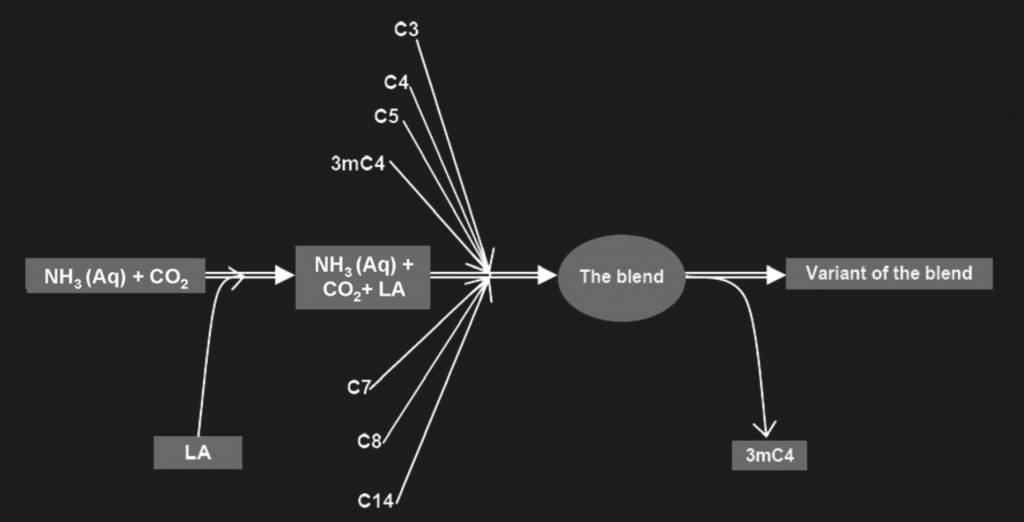 They then tested the effectiveness of the developed synthetic lure in attracting several different types of mosquito species as seen in Figure 5 below. 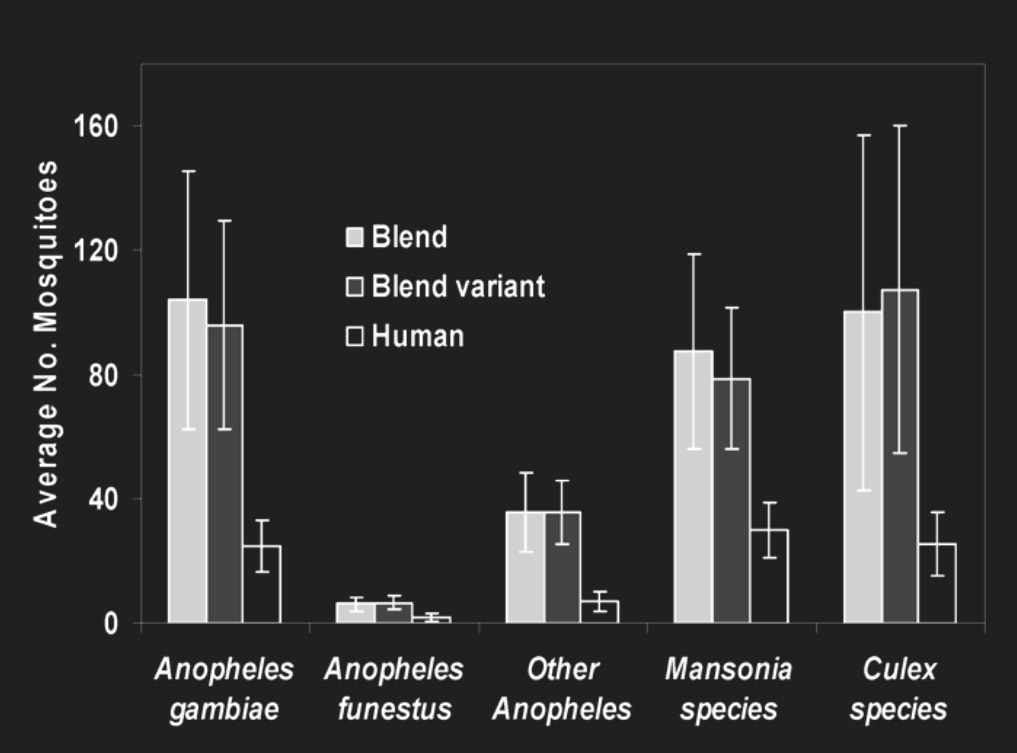 As can be observed from Figure 5 above the synthetic was a success. The mosquitos clearly preferred the synthetic to the human lure. The question arises whether or not the lure’s effectiveness might have been further increased by adding 1-octyn-3-ol and Nonanal to the mixture. They may, like other substances, have a synergetic effect.

Mosquitoes are attracted to a combination of human attributes including heat, CO2 and various other compounds found both on our skin or breath that have a largely synergetic effect on attractiveness. The key to a highly effective mosquito lure is certainly the carboxylic acids. Furthermore visual stimuli also play an important role in the host acquisition process of mosquitoes. Considering the amount of traps that use UV light as one of their attractants it seems that they where built to impress the consumer with a high bug catch rate rather than effectively catch mosquitoes. Whilst this research into the various attractants of mosquitoes was rather in depth, whether or not it is actually necessary to use such an advanced lure remains to be seen. The next step is to create an affordable synthetic lure to attract the mosquitoes effectively enough for them to choose the trap over myself, as well as design a portable trap for the lure.

27 thoughts on “Mosquito attractants for an effective trap”